GALACTICA was featured in the European Cluster Conference 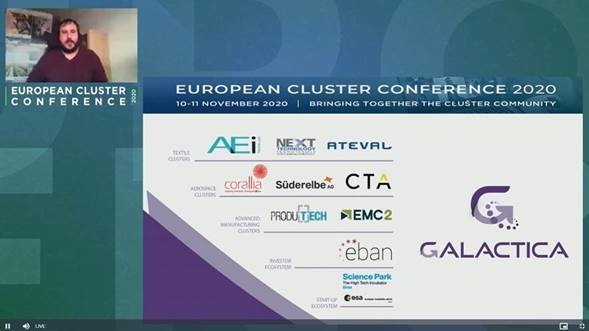 GALACTICA – “Smart Industrial innovation as enabler to drive new value chains for textiles and aerospace”, was featured during the European Cluster Conference 2020.  The conference was held on November 10th and 11th.

This year, the conference major focus was on the role of clusters to drive the green and digital transition across the different strategic value chains to make industry more resilient. The conference was organized virtually with over 1.000 participants from different European clusters, European Commission policy officers and relevant stakeholders.

Josep Casamada, Project Manager at AEI Tèxtils and project coordinator of GALACTICA project, presented the project during the EU Financing landscape session of the first day. The project was among the four project selected for this session for its potential impact on the textile and aerospace sectors in Europe for developing economic opportunities based on innovation to strengthen industrial resilience.

GALACTICA project aims to support the creation of new industrial value chains around textile and aerospace based on advanced manufacturing. The project will facilitate the uptake of Industrial Intelligent Systems and Industrial Internet of Things as part of the strategic innovation drivers for the textile and aerospace industries. The project will run until February 2023. GALACTICA has received funding from the European Union’s Horizon 2020 research and innovation programme under Grant Agreement No 872336.

The GALACTICA consortium integrates eight European clusters and two innovation agents: AEI Tèxtils in Catalonia as project coordinator, ATEVAL in Valencia and CTA in Andalusia (Spain), NTT in Italy, CORALLIA in Greece, Suderelbe in Germany,  PRODUCTECH in Portugal, EMC2 in France, EBAN in Belgium and Science Park Graz in Austria.

The project has a total budget of 5 M€ from which 4M€ are directly targeted to support SMEs to innovate with diverse mechanisms including 3M€ financial support through two open calls for proposals, hackathons and travel grants. The first call for proposals will be launched in March 2021 and the second one in January 2022.

The project will also organize a set of activities prior to each call for proposals to facilitate generation of project ideas such as workshops, matchmakings and online webinars. Due to the current situation, the first round of activities will be held mostly virtually. GALACTICA will reach directly 1.400 SMEs, 170 large companies and over 200 research facilities across 8 EU-countries.